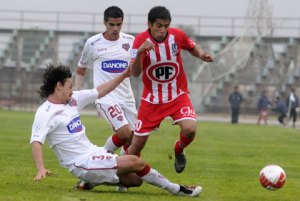 Unión Espanola will confirm their Clausura play-off place with a win at Universidad de Concepción who will then have to rely on results elsewhere to survive in the Primera Division. Cobresal will avoid relegation and confirm a Championship play-off place by picking up three points at home to Santiago Morning who would then be relegated. A Santiago Morning win – they have to win to have any chance of surviving – would see them leapfrog Cobresal in both the General and Clausura table, into a possible Championship play-off place. But again they would have to rely on results elsewhere. For example . . . actually there are far too many permutations to even consider. It would take Sheldon Cooper, a blackboard and his lunatic genius to work out.

It is only right to start at the end. Sunday evenings encounter between Ñublense and La Calera. With most teams around them picking up points the home side knew a win was the only thing that could save them from an early relegation. Not forgetting that it was imperative for La Calera to record at least a draw to stay in the race for a Clausura play-off place.

A scoreless first hour gave way to an exciting final 30 minutes. La Calera were first to strike as Lucas Simón tapped in at the back post. With 15 minutes left however, defender Sebastián Montesinos found himself in the La Calera box levelling for Ñublense with a competent finish to set up a thrilling finale. But after Lucas Concistre agonizingly hit the bar a horrific mistake by Diego Olate at the other end let in Simón to net past a stranded Fuentes. A cruel blow compounded late on when Octavio Pozo curled in a delicious free-kick from 25 yards, confirming Ñublense’s relegation but more importantly for the away side leaving them a point off the Clausrua play-off places.

With wins in consecutive games Santiago Morning were going in to their ‘proverbial six-pointer’ clash with relegation rivals Universidad de Concepción in a confident position, compared to Concepción who had won one of their last nine. Yet what transpired in the second half was of prime importance. Pedro Muñoz’s 15 minute, second half hat-trick gives Morning a mountain to climb in keeping their Primera Division status, leaving Concepcion knowing a win will secure survival.

Santiago Wanderers 1-0 home win over O’Higgins, coupled with their namesake Morning’s defeat leaves the Wanderers four points above the automatic relegation positions; yet they are still in danger of being dragged into a relegation play-off when they travel to La Calera on Sunday; an important game in both tables.

A youthful Wanderers side were rarely troubled by O’Higgins but despite good work from the lively duo of Michael Silva and Sebastían Rusculleda they themselves struggled to create meaningful chances. It was left to substitute Sebastían Ubilla to poke home a loose ball from a corner minutes after coming on. A real poachers goal.

Santiago Morning’s loss also means that Deportes Iquique are safe from automatic relegation. Iquique drew 1-1 with Colo Colo who are suffering a dip in form in the lead up to the play-offs. It was their 4th game without an away win.

Alvaro Ramos had looked to have given Iquique a vital win with a free header in front of a raucous home crowd swelled by a passionate away following. A win which would have confirmed their place in next years Primera Division. However Iquique would come to rue missed chances as Mario Salgado fired home a Carlos Muñoz knockdown to earn Los Albos a point but it did not stop them dropping to 5th in the Clausura. Iquique now travel to Cobresal in another game that has ramifications for both the General and Clausura tables.

On Friday night Huachipato fell to a 1-0 home defeat to Palestino – who have little left to play for – and dropped into the relegation play-off places as results went against them.

Huachipato needed to win both of their two final games to have any chance of reaching the Clausura play-offs, but after a positive start to the game they faded and could not thwart the attacking threat of Palestino’s Junior Fernandes. Fernandes had a big hand in the only goal of the game, running unchecked down the left-hand side he clipped a perfect cross for Javier Velásquez to stylishly volley home. Huachipato travel to O’Higgins knowing they need to get a result and other games go their way to survive relegation or the relegation play-offs.

Cobresal hung on to their place in the Clausura play-offs and their place outside the relegation play-offs with a late, late goal away to Unión San Felipe. A goal that could prove crucial come the final reckoning. Ezequiel Carballo had given San Felipe a first half lead, only for Uruguayan Pablo Pallante to equalise deep into injury time. San Felipe now travel to Palestino with much tougher job to do than looked likely as they game entered the final stages, while Cobresal will be counting on a win against Iquique due to their poor goal difference.

Elsewhere in the Primera Division Deportes La Serena joined Cobreloa on 28 points thanks to a 2-1 win over their opponents. Diego Barrios opened the scoring in the 4th minute for the visitors, Cobrelao. But La Serena hit back with Mauricio Salazar and Juan Sáanchez Sotelo – his fourth in four games – strikes in the second half ending Cobreloa’s six game unbeaten run.

There was only one contender for game of the weekend. And it wasn’t the Clásico Universitario; Universidad de Chile v Universidad Católica. It was the game between Unión Española and Audax Italiano. Española were in search of a win that would take them into the Clausura play-offs where as Italiano were playing for position having already qualified for the play-offs.

Los Tanos were first to strike as Daniel González, unmarked, headed home Matías Campos Toro’s cross. The lead lasted ten minutes, Sebastían Jaime bettering González’s header with a header of his own, glancing home from the edge of the box. Three minutes later and Española had turned the game on its head, Leandro Monje unleashing an unstoppable effort from 30 yards. And a further three minutes had advanced when Monje grabbed his second, racing onto a flicked through ball, firing across the goal into the bottom corner. The quick fire scoring wasn’t finished. Facundo Pereyra grabbed his 10th of the Clausura, joining Esteban Paredes at the top of the goal scorer charts, straight from kick-off; expertly turning a defender in the box and finding in the back of the net with a powerful effort.

The second half brought only the two goals. The impressive Jean-Paul Pineda scored the rebound from his missed penalty after Christián Jelves picked up his second booking for bringing down Jaime in the area. Monje completed the scoring and his hat-trick with a confident finish having rounded the goalkeeper.

Finally the Clásico Universitario was a damp squib as Jorge Sampaoli took the opportunity to make nine changes in preparation for the Copa Sudamericana semi-final first leg against Vasco da Gama in Brazil. Unsurprisingly the La U struggled for fluidity with Eduardo Vargas, Marcelo Díaz, Gustavo Lorenzetti et al missing. However there were positives as 17-year-old defender Igor Lichnovsky was handed his debut. Católica’s away day slump continued in the Estadio Nacional taking their Clausura record to one win in nine away games.

And then there was one.