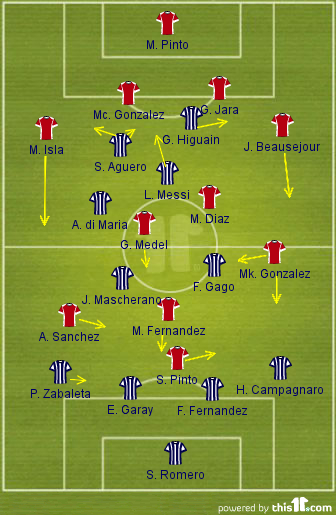 Pace, width, relentless pressing; Qualities that had been missing in Chile’s fall to Ecuador in the previous match. But against Argentina the Chile of old was evident, right down to the defensive deficiencies that ultimately cost La Roja a crucial point (or three) in the race to qualify for Brazil 2014.

Yet, even after such an explosive and positive opening Chile ended the game pointless, undone by their profligacy and Argentina’s ruthlessness. La Roja had chances, good chances, to go in front through Gary Medel, Sebastián Pinto and Mark González, but were hit by two sucker-punches before half-time; a coolly taken Lionel Messi goal and a ferocious individual goal from Gonzalo Higuaín.

Borghi’s side tried to find a way back into the game in the second half but could not break down an obdurate Argentina defence until it was too late.

END_OF_DOCUMENT_TOKEN_TO_BE_REPLACED

Chile scrapped their way past a Bolivian side, who can feel pained not to have picked up at least a point, thanks to goals late in each half by Charles Aránguiz and Arturo Vidal, in what was the fifth qualifying match for Brazil 2014.

The outcome was exactly what La Roja were looking for after the two comprehensive away defeats previously to Argentina and Uruguay and lifts them into second place behind Argentina in the qualifying standings. However the means in achieving the victory were not what football fans across the globe have come to expect from Chile.

A more clinical opponent in a match officiated by a competent referee could easily have resulted in Chile’s third defeat of the World Cup qualifying, leaving an uphill task for Claudio ‘Bichi’ Borghi’s side. But with Arturo Vidal back in the heart of the midfield La Roja huffed and puffed, scrapped and fought and eventually won through thanks in no part to the determination affirmed by the two goals scored from midfield.

END_OF_DOCUMENT_TOKEN_TO_BE_REPLACED 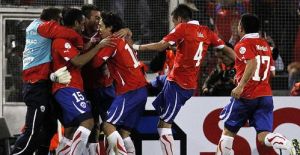 Two minutes. That is all it took for Chile to put Friday’s defeat to Argentina behind them and kick-start the long road to Brazil 2014 with a manic 4-2 win over Andean rivals Peru – providing the perfect tonic for an ill Claudio Borghi. Defensive errors that plagued the team in the 4-1 defeat to La Albiceleste were still evident and show no sign of being eradicated but further forward La Roja continue to exhilarate and excite.

Eduardo Vargas – who was one of three Chilean changes from Friday – gave La Roja a dynamic presence in attack troubling Peru with his direct runs and pace while the combination of Gary Medel and Arturo Vidal in the midfield provide a solid base with bite – defensively and offensively. Then there is ‘El Mago’ himself, Jorge Valdivia. He truly is the magician, his feet wands linking midfield and attack, disappearing and reappearing at the right times.

END_OF_DOCUMENT_TOKEN_TO_BE_REPLACED 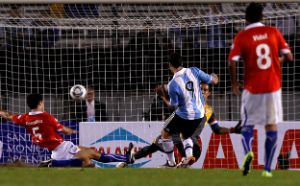 It wasn’t the start to World Cup qualifying for Brazil 2014 Chile had in mind; falling behind early on did not seem to deter La Roja but a second goal before half-time and when Chile were enjoying a period of domination all but ended the contest. Here is a belated review of some talking points from the game on Friday:

As admirable as it was to state that “we will attack” Argentina from the beginning and setting his team up in a 3-3-2-2 (ish) formation – which included two wing-backs, two ‘No 10s’ and two strikers – Borghi got it wrong. Simple as that. With injuries in defence robbing ‘Bichi’ (Borghi’s nickname) of Pablo Contreras and Osvaldo González there was a required shifting of personnel and a vital midfield component, Arturo Vidal, to the backline. The back three should have been given greater protection than a sole midfield holder (Carlos Carmona), flanked by two wing-back-cum-wingers.