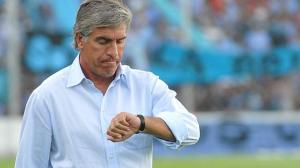 The tumultuous start to the Chilean Apertura continued as four teams picked up their first win of the season, Universidad de Chile suffered a heavy defeat in Rancagua, Colo Colo were booed off again and TRO keeps getting things wrong.

However a win still eludes Audax Italiano (and Cobresal) despite remaining highly watch-able. This time they were out-done by a Daniel Carreno’s Palestino who have been unlikely to have to wait until the fifth week to collect their first win. But from the game question marks still persist over the way Omar Labruna sets up his Audax side.

Elsewhere it was Cobreloa’s turn to occupy top spot after a comprehensive 3-0 success away at Rangers. Their sheer consistency has been enough to put them above everyone else, despite having played one game less.