Just over 12 months ago La U travelled to Brazil to put in arguably their most devastating performance under Jorge Sampaoli as they obliterated a Flamengo team including Ronaldinho 4-0; prompting headlines in Brazil comparing Los Azules to Barcelona.

On Wednesday night La U were back in Brazil in the quarter-finals of the Copa Sudamericana and in act of symmetry, if that’s the correct word, La U were handed their worst night since Sampaoli took over – if not their worst then certainly their most embarrassing.

From start to finish São Paulo, ruthless and efficient, stormed through La U to devastating effect; Jadson opening and then closing the scoring (there’s that symmetry again) as the Brazilians stuck five past Jhonny Herrera.

La U knew they had to win and Sampaoli set out his team to do just that. And then apologised after for doing so, solely taking the blame.

São Paulo’s pace and precision on the counter-attack was out of this world. Lucas, who moves to France in the new year, scored and put on a show as if to say I’m worth (the reported) £35m, while Luis Fabiano netted the goal of the game, reminiscent to the one Hernan Crespo scored against Liverpool in that Champions League final. Even centre-back Rafael Toloi got in on the act, thundering in a free-kick from 30 yards.

END_OF_DOCUMENT_TOKEN_TO_BE_REPLACED

The Copa Sudamericana quarter-final second-leg’s kick-off tonight as Universidad de Chile travel to Brazil in an attempt to overturn a 2-0 first-leg loss to Sao Paulo. So what exactly happened in the first-leg’s? Better late than never, I will quickly run through some of the taking points with the addition of highlights of each match and a brief preview on this week’s games.

END_OF_DOCUMENT_TOKEN_TO_BE_REPLACED 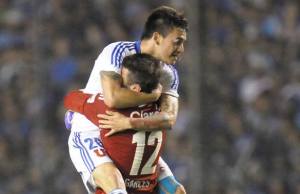 Santiago is the only city in South America with two representatives in the quarter-finals of the Copa Sudamericana after Universidad Católica and Universidad de Chile both came through tight two-legged affairs.

Both teams’ progression means that there is still the possibility of the clubs meeting in the semi-final. But before then they need to come through tough ties against illustrious clubs from Argentina and Brazil.

UC and La U went into their games on the back of disappointments in the league; UC were beaten 2-0 at home to Huachipato while Los Azules lost el superclásico to arch-rivals Colo Colo.

END_OF_DOCUMENT_TOKEN_TO_BE_REPLACED

Without trying to upset fans of other teams there was only one game that stood out this weekend in the Clausura: El Superclásico. Colo Colo v Universidad de Chile.

The previous three games had finished with an aggregate of 9-2 in La U’s favour but as Colo Colo’s Felipe Flores point out their rivals have regressed since winning the Copa Sudamericana and reaching the Copa Libertadores semi-finals whilst Los Albos have improved immeasurably under Omar Labruna; unbeaten in 10 leagues games going into the game.

There was also the small matter of Universidad de Chile’s wretched record at the Estadio Monumental having not won in over 11 years.

In terms of quality it shaped up to be the tightest match between the two sides in 18 months or so.

What transpired didn’t surprise many with incidents, controversies, red cards, missed chances but not as many goals as one would come to have expected. And La U still can’t win in Macul . . .

END_OF_DOCUMENT_TOKEN_TO_BE_REPLACED 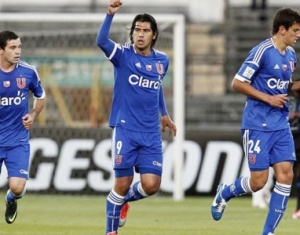 While the Copa Sudamericana began back in late August Universidad de Chile had to wait until Tuesday evening (CLST) before they could begin the defence of the title they won in thrilling fashion last year. In that time three Chilean sides – Cobreloa, Deportes Iquique and O’Higgins – fell by the way side which left Universidad Católica as the sole Chilean survivor of the first two rounds (La U entering at the last-16 stage as holders).

Universidad de Chile had not won on the continental or international stage since their obliteration of Deportivo Quito at the quarter-final stage of the Copa Libertadores in May. Since that 6-0 thrashing of the Ecuadorians La U have played 7 games, drawn 4 and lost 3 – one of which was on penalties.

And it was Ecuadorian opposition again for Los Azules in the shape of Emelec from the city of Guayaquil. But if you were looking for symmetry as La U ended their winless run then you will be disappointed.

La U lacked the fluidity, tempo and aggression that brought them success in last year’s edition of the Copa Sudamericana, falling behind to a fine Luciano Figueroa finish before Enzo Gutiérrez equalised. Marlon de Jesús put Emelec back in front as the game headed for the recess but Sebastián Ubilla restored parity moments after the break. La U could not kick on and find the winner which would have given them a slender advantage going into the return leg.

END_OF_DOCUMENT_TOKEN_TO_BE_REPLACED

Santos lifted the Recopa Sudamericana for the first time in their history after a 2-0 aggregate win over Copa Sudamericana holders Universidad de Chile. The first-leg in a wet Santiago finished 0-0 but the quality and pace of the Brazilians on the break proved too much for La U in what was an entertaining and fast-paced encounter.

Jorge Sampaoli had one player in mind when setting La U up in a 4-3-1-2 formation; Neymar. The conservative Albert Acevedo was played at right-back in a flat back four with Matías Rodríguez moved into a right of centre midfield position. In his comments to the press on the eve of the game it was clear how important Sampaoli regarded Neymar, stating that “Santos depend too much on one player (Neymar).”

Santos were sent out in a more functional 4-4-2 by coach Muricy Ramalho; Neymar given freedom to roam around Andre with Felipe Anderson and Patricio Rodriguez on the wings and Arouca and Adriano the holding pair in midfield.

END_OF_DOCUMENT_TOKEN_TO_BE_REPLACED

It was a busy evening for Chilean clubs spread across three competitions last night. Universidad de Chile returned to domestic business, the Copa Chile group stage got under way with eight matches and O’Higgins went to Paraguay looking for progression to the second round of the Copa Sudamericana.

END_OF_DOCUMENT_TOKEN_TO_BE_REPLACED 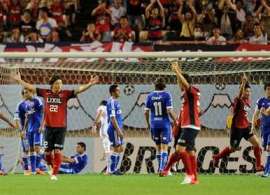 Heartbreak for La U (img: Ole)

Universidad de Chile’s hunt for an unprecedented seven trophies in 2012 took another blow in Japan.

Defeat on penalties to Kashima Antlers in the Suruga Bank Championship means it is now one trophy, the 2012 Apertura, from three with a further four to come in the second half of the year – Clausura, Copa Sudamericana, Recopa Sudamericana and Copa Chile.

Jorge Sampaoli and the club were taking the game in Kashima with the utmost seriousness. Arriving in Australia last week to prepare; acclimatising to the time difference and conditions.

Sampaoli’s ambitions were reflected in his team selection and his minor dispute with the ANFP as he wanted to postpone Ángelo Henríquez’s departure with the Under-20 side currently touring Europe until after the match.

END_OF_DOCUMENT_TOKEN_TO_BE_REPLACED

When Eduardo Vargas boarded a plane for Naples in January, he left a void in the Universidad de Chile squad. And not just any void either, but a gaping hole as the Copa Sudamericana player of the tournament and top scorer left in a lucrative move to Napoli.

The Chilean international’s departure, along with that of regular first-team members such as Gustavo Canales, Marcos Gonzalez and Diego Rivarola, meant greater responsibility fell on the shoulders of those still at the club. One player more than most has thrived under the pressure, despite his partner in crime leaving to prove himself in Serie A with Napoli. Meet the Azul’s answer to Dani Alves in the team dubbed the ‘Barcelona of the Americas’: Matias Rodriguez.

For much of January it was speculated that the right-sided Argentine wing-back would also cross the Atlantic and join Benfica’s South American legion, but he stayed in Santiago. Not only has he stayed, he has arguably been transformed into the club’s most important player; impressing so much that the calls for a first cap to the Argentina team intensify with each passing week.

END_OF_DOCUMENT_TOKEN_TO_BE_REPLACED 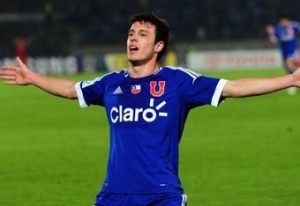 The future King of Chilean football?

South America is a haven for football scouts from all across Europe and further afield. Cast your gaze across European football’s landscape and most clubs posses a South American playing a prominent role in their team. Barcelona and Lionel Messi, Manchester City and Sergio Agüero, Napoli and Edison Cavani AC Milan and Thiago Silva to name but a few.

And one South American nation, more than most, are making extra room for scouts as interest in their players increase. But it is not the traditional giants of Brazil and Argentina or even Uruguay who have achieved so much with such a sparse population. It is Chile. The land of Marcelo Salas and Ivan Zamarano, the Andes and Atacama, Colo Colo and Universidad de Chile.

It is a breeding ground of talented – and temperamental – footballers. The success of the Chilean national team in the last few years and more recently Universidad de Chile has brought attention to the world’s longest country. And within it there are a number of talented footballers waiting to break-out and join Mauricio Isla, Mauricio Pinilla, Alexis Sánchez, Arturo Vidal, Jean Beausejour, Sebastián Pinto and more in the epicentre of football.

END_OF_DOCUMENT_TOKEN_TO_BE_REPLACED

The Red One
Blog at WordPress.com.