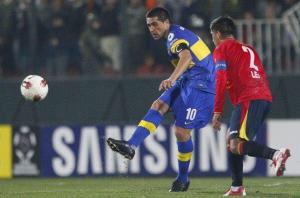 Juan Román Riquelme. The name synonymous with Argentine number 10’s. The name that flows of your tongue like a passing move orchestrated by Juan Román himself. The ultimate enganche. El Diez.

And JRR was at it again last night, providing another master class as Unión Española fell from the Copa Libertadores at the last-16 stage.

Despite a late Santiago Silva goal in the first-leg and trailing 2-1 there was hope for the exciting and expansive Española in front of a packed Estadio Santa Laura. That was until one of the great artists, his right foot a paintbrush, decided on having another performance not to be forgotten. Involved in every goal Riquelme led Boca to a 3-2 win setting up a quarter-final tie with either Fluminense or Internacional.

While having their chances, especially in the first-leg, La Furia Roja, led be José Luis Sierra, can exit the competition with their reputation enhanced, playing a thrilling 4-3-3 that saw victory claimed in Bolívar of all places.

END_OF_DOCUMENT_TOKEN_TO_BE_REPLACED 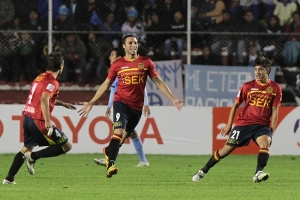 Unión Española put back-to-back league defeats behind them to defy pre-match expectations and win at altitude in La Paz against Bolívar.

Trailing 1-0 inside the opening minute, La Furia Roja looked to be heading for a third straight defeat, but after surviving a number of first half scares the Chileans responded with three second half goals to record their second win of the Copa Libertadores; putting them top of group 3.

Española barely had time to settle when the Bolivians ran through their midfield to set up a cross from the left. The cross was not defended by José Luis Sierra’s side and Edhemir Rodríguez nipped in-front of his marker and saw his flicked shot come back of the post but he was the quickest to react to the rebound and made sure from a few centimetres out.

END_OF_DOCUMENT_TOKEN_TO_BE_REPLACED 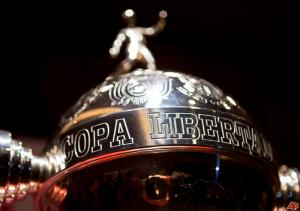 Chile has three participants in this years Copa Libertadores. Everyone’s eyes will be on Jorge Sampaoli’s Universidad de Chile who are looking to make it a Copa Libertadores/Copa Sudamericana double but must do so without the brilliance of Eduardo Vargas. However they have retained Jorge Sampaoli and the bulk of the squad which won the Sudamericana before the new year, as well as the 2011 Apertura and Clausura, while adding even more promise to the squad.

Chile’s other contenders are Universidad Católica and Unión Española who occupy the same group and it is hoped, and expected, that at least one of the two qualify. They may not have the quality throughout the squad La U possess but both have talented youngsters that could light up the Libertadores.

Hopefully the gifted youngsters from each team are allowed to illuminate the knock-out stages:

END_OF_DOCUMENT_TOKEN_TO_BE_REPLACED 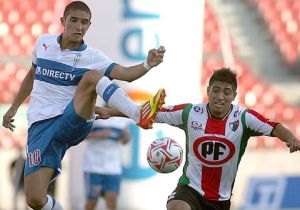 With the Clausura’s top two – Universidad de Chile and Cobreloa – not in action there was a chance for one of the contenders to lay down an early marker as Santiago inhabitants looked to escape the baking heat which had swept the capital.

However Colo Colo were booed off at home to Deportes Iquique – who had new signing Edson Puch impressing on his debut – while Universidad Católica recovered from an insipid first half performance to collect three points. There was better news for Union  Española who added to their first round first-leg Coap Libertadores win with maximum points.

The two promoted teams enjoyed mix fortunes back in the Primera.