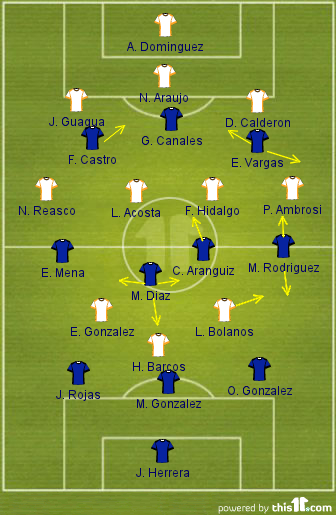 They say that our destiny is written in the stars. And if the Universidad de Chile players looked up to the sky after their resounding 4-0 victory in Brazil against Flamengo they may have just seen the Copa Sudamericana, and the club’s first ever continental trophy. The same could be said about any of the games in this record breaking Copa Sudamericana run, part of the club’s mammoth 35 game unbeaten spell. But the famous result in Brazil had people sit up and take notice, ‘wow’!

Now their ‘destiny’ has become reality . . .

Having worked so hard, especially in the defensive phase with a new 3-1-4-2 shape in Ecuador to come away with a crucial 1-0 win in the first-leg of the final La U showed no signs of nerves or apprehension, just steely determination and conviction to make sure there was no let up in the club’s biggest game in their history.

Reverting to their trusted 3-4-3 – Francisco Castro replacing Albert Acevedo – La U were in no mood to sit back defend their lead. They stuck to the principles bestowed in them by Argentine coach Jorge Sampaoli, relentlessly pressing and suffocating the life out of a shell-shocked LDU from kick-off. The Ecuadorians, who do similar to teams at home, had no answer, constantly giving the ball away, panicking, dazed and confused.

The fitness of the Chileans was startling; the pint-sized quartet Charles Aránguiz, Marcelo Díaz, Eduardo Vargas, Castro as well as Gustavo Canales and the two wide-men Eugenio Mena and Matías Rodríguez scurried and scuttled around the pitch. Scenting blood they hunted in packs.

END_OF_DOCUMENT_TOKEN_TO_BE_REPLACED 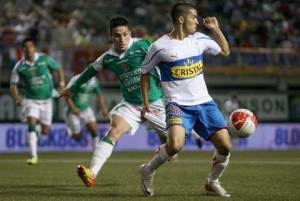 The closing stages of the Primera División are well and truly underway as four teams were eliminated over the weekend, setting up a Clásico Universitario semi-final and potential ‘El Clásico’ final, while Cobreloa – the only non-Santiago team in the last four – will be happy to just be there after an almighty scare at home to Unión La Calera, leaving it late to confirm their place.

END_OF_DOCUMENT_TOKEN_TO_BE_REPLACED

It is said that third time’s a charm. Except for Universidad de Chile, where it’s 5th time lucky. The famous Chilean team had never before competed in a Continental final, sitting in the shadow cast by their rivals Colo Colo’s 1991 Copa Liberatadores and 1992 Recopa Sudamericana successes.

However that may be about to change after defeating Brazilian’s Vasco da Gama 2-0 (agg 3-1) in the second leg of the Copa Sudamericana semi-final to their book their place in their first ever Continental final at the 5th time of asking.

Goals from Gustavo Canales and Eduardo Vargas either side of half-time eased La U into the final where they will now meet Ecuador’s LDU Quito.

There was one change from the first leg for La U, Matías Rodríguez coming in for Gustavo Lorenzetti, giving the team a balance that he provided when he came on in the first half in Brazil.

END_OF_DOCUMENT_TOKEN_TO_BE_REPLACED

What is it with this Universidad de Chile side? 25 games unbeaten, a Chilean record broken for consecutive minutes without conceding in international competition, a 4-0 destruction of Flamengo in Brazil and on Sunday in the Superclásico rescuing a draw in the 101st minute despite playing the whole of the second half with not eleven, not ten but nine men. And I haven’t mentioned the talent in the team or the vibrancy in the side’s play.

Now – thanks to a hard-fought performance – the club’s first ever competitive win on Argentine soil.

Arsenal are the antithesis of their English namesake; set up in a 4-4-1-1 shape they favour a direct approach, two traditional wingers in Diego Torres and Juan Pablo Caffa supporting a front two of Emilio Zelaya and the target-man and focal point of the Arsenal attack Mauro Obolo, charged with holding the ball up. The midfield base of Jorge Ortíz and Iván Marcone play a simple game, if one goes forward to support the other stays to protect the defence; essential with the forward runs of both full-backs.

By now we all know how Universidad de Chile like to play; a fast possession based game, suiting their diminutive personnel while putting pressure on the opposition when out of possession. The starting line-up was identical to the one which started away to Flamengo. However Matías Rodríguez was pushed into a more advanced role down the left, making a 3-1-3-1-2 almost as you can see from the formation diagram.

The performance was unlike the one in Brazil the previous round; Arsenal not allowing the plethora of attacking talent – which La U possess – the space in which they can run rings around the opposition. Instead they were drawn into a battle that got feisty and niggly as the game wore on.

END_OF_DOCUMENT_TOKEN_TO_BE_REPLACED 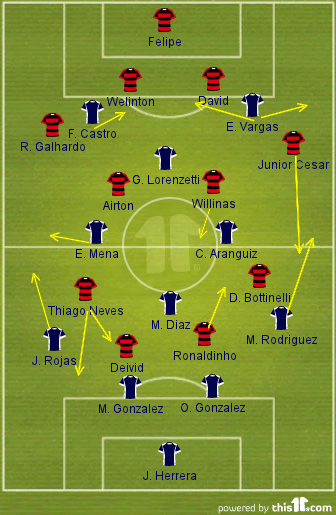 Universidad de Chile have one and a half feet in the quarter-final stage of the Copa Sudamericana  after one of the great away performances in continental football, travelling to Brazil to face Ronaldinho’s Flamengo and coming away 4-0 victors. A result they fully merited, running amok in the Estadio Olímpico Joao Havelange with a sumptuous and exhilarating performance.

Ex-Real Madrid boss Vanderlei Luxemburgo lined up his side in a 4-2-2-2 system, synonymous with Brazilian football. Full-backs Júnior César and Rafael Galhardo expected to provide width to a front four including ex-Fenerbache striker Deivid and Ronaldinho.

Jorge Sampaoli continued with the set-up and personnel which has served his side so well so far domestically and in the Copa Sudamericana where they have now gone over 400 minutes without conceding a goal, breaking Unión Española’s previous record. Eduardo Vargas returned to the side in the loose 4-3-3/4-1-2-1-2, supported by an intelligent and energetic midfield three and clever trequartista in Gustavo Lorenzetti.

A casual observer could have easily mistaken La U for the home side from their bright start. The Chilean side made the pitch as big as possible immediately settling onto the front foot. Vargas and Francisco Castro stretching the game vertically – Flamengo wary of the former’s blistering pace – and horizontally giving Lorenzetti, ably supported by Charles Aránguiz and Eugenio Mena, acres of space in the middle to work with, outnumbering Flamengo’s midfield pair, Aírton and Willians. Castro fired an early warning shot, Fla’s midfield anchoring duo too high, leaving an abundance of space in front of the defence.

END_OF_DOCUMENT_TOKEN_TO_BE_REPLACED 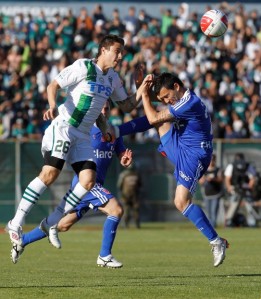 Nelly Furtado was right when she ‘sang’ All Good Things Come to an End. Barely three days after making history by winning nine consecutive league matches Universidad de Chile’s run had come to an end, just when it was looking like they would be unstoppable.

Travelling to joint bottom of the league Santiago Wanderers, a tenth consecutive win was almost a given. But it wasn’t to be and could have been much worse after the home side took the lead early on and then Universidad were reduced to 10 men when Marcos González was sent-off in the second half after Francisco Castro had equalised in injury time of half-time. But neither team threatened to take all three points while Santiago goal scorer Orué saw red late on.

There was only four minutes on the clock when Santiago Wanderers took the lead. A free-kick was won just inside La U’s half; Sebastián Rusculleda’s inswinging left-footed delivery caused Los Azules defence to drop deep into their box and La U midfielder Albert Acevedo glanced a header against his own post with Herrera scrambling across to keep it out. The ball fell invitingly for Ángel Orué to knock home the rebound into the empty net from inside the six yard box as Herrera lay helpless on the ground.

END_OF_DOCUMENT_TOKEN_TO_BE_REPLACED 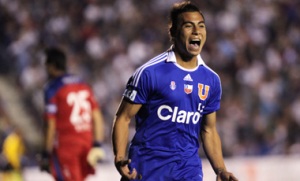 Week nine of the Chilean Clausura provided an average of three goals a game over the weekend as Universidad de Chile continued their dominance at the top of the league creating histroy by becoming the first side in Chilean domestic football to win nine consecutive matches. There was also big news at the bottom as Santiago Morning upset the odds with a 3-2 defeat of Universidad de Catolica to rise from bottom of the 18 team league to 13th in one fell swoop.

La U ran out comfortable winners in the last game of the weekend, defeating O’Higgins 3-0 at the Estadio Nacional Julio Martinez Prádanos. You can read about the match report from the history making match here.

Santiago Morning must have feared the worst when Matias Mier put Catolica ahead after eight minutes but the home side responded in emphatic fashion by not only drawing level, but taking the lead before half-time. Catolica levelled but immediately lost scorer of the first goal Mier who turned villain collecting his second booking of the encounter. Morning won in dramatic fashion with a penalty, converted by Ever Cantero, three minutes from time.

END_OF_DOCUMENT_TOKEN_TO_BE_REPLACED

Universidad de Chile joined rivals Universidad Catolica in the final stages of the Copa Sudamericana where they will meet Braizlian giants Flamengo after the second round tie with Uruguayan side Nacional was suspended only a minute into the second half.

Leading 1-0 from the home tie, La U went 3-0 on aggregate with two goals in as many minutes early in the first half. But moments into the second half the near-side linesman was hit on the head by a streamer thrown from the Nacional crowd, resulting in the official being carried away on a stretcher.