After a stay of execution afforded to him in the aftermath of the defeats to Ecuador and Argentina in the last batch of World Cup qualifiers, Claudio Borghi knew he and his Chilean side had to deliver a performance of significant improvement in the friendly with Serbia.

Ninety torrid minutes later and Borghi had departed, or has he told the media sacked. Ninety insipid minutes; the match clock not acting as a timer for the game but a countdown until La Roja were Borghi-less, something which fans up and down the Chilean peninsula were eager to see.

END_OF_DOCUMENT_TOKEN_TO_BE_REPLACED

The Estadio Nacional. Chile v Argentina. 16 October 2012. Four years to the day since Marcelo Bielsa recorded arguably his finest win in charge of La Roja; a 1-0 victory over La Albiceleste giving Chile their first ever competitive win against Argentina. Now the Nacional is the scene of Claudio Borghi’s, Bielsa’s successor, last stand.

A positive result against their rivals and Borghi should be able to hang onto his job until the next round of qualifying matches, with Chile still in a good position to qualify for Brazil. Lose and the Chilean fans will do their damndest to get their wish of Borghi being relieved of his duties.

Fans have already made their feelings known at Chile’s training base in Macul, Santiago; ‘Borghi Out’, ‘Thieves’ and ‘National Shame’ were scrawled onto the training complex while eggs were also thrown.

END_OF_DOCUMENT_TOKEN_TO_BE_REPLACED

‘The Red One’ has teamed up with Chile’s premier English language media group ‘I Love Chile‘ to provide even more news and comment on Chilean football.

After terrible performances against Ecuador and Colombia, Claudio Borghi is under pressure to keep his job. He is not helped by the fact he joins a full team on the sidelines for the match as Daniel Boyle finds out.

Following the 3-1 loss against Ecuador, Chile need a win to keep their World Cup qualifying campaign on track. Pressure is building on coach Claudio Borghi, who remains suspended after a verbal spray against officials in Venezuela.

Joining him on the sidelines is a full team worth of players, out through either injury or suspensions, including captain Claudio Bravo and vice-captain Humberto Suazo. I Love Chile has named a lineup that won’t be taking the field against Messi and friends.

END_OF_DOCUMENT_TOKEN_TO_BE_REPLACED

Even though there is still 8 games to play, last night’s 3-1 demolition – let’s be honest it was a demolition– handed out by Ecuador felt like seeing your prized Ferrari mis-handled in the garage by a mechanic before your own eyes, prompting the feeling that you may never see it in all its glory again, until a new mechanic is brought in to fix it.

There’s a popular feeling that Borghi, spanner in hand, is slowly dismantling a promising side before eventually replacing his spanner for a sledgehammer and obliterating Chile’s Ferrari.

The Chile that people fantasise and reminisce about were nowhere to be seen: the eclectic movements; defenders attacking; attacker defending; the frantic football that left your head in a spin, yet you wanted to see more and more. And more.

People have to remember it is no longer Marcelo Bielsa’s team. It’s Claudio ‘Bichi’ Borghi’s. But the marriage they didn’t want to end did. Reluctantly, they have had a new partner for a while now and they want it to end. Quick.

Despite taking the lead through a ridiculous own goal, Chile never looked comfortable and were soon pegged back through Felipe Caicedo. The same player made it 2-1 after Pablo Contreras was shown a second yellow for bringing down Ibarra in the box; the penalty was missed but Caicedo netted the rebound. Segundo Castillo completed a score line that could, and should, have been more convincing.

So what exactly happened:

END_OF_DOCUMENT_TOKEN_TO_BE_REPLACED 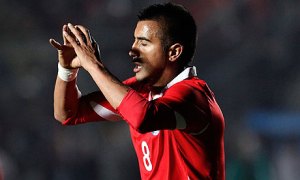 Vidal; Back in La Roja.

The importance and of Arturo Vidal to Chile was evident last week as Claudio Borghi named his 25-man squad for the upcoming World Cup 2014 qualifying double header against Bolivia and Venezuela.

Serving a 10 game suspension from the national side, along with Carlos Carmona, Gonzalo Jara, Jean Beausejour and Jorge Valdivia for the part they played in the ‘Chile 5’in November last year, it was expected Vidal would miss the crucial qualifying matches with Chile lying 5th in the qualification table.

However Vidal has been pardoned by the ANFP – Chilean Football Association – allowing him to take his place in Borghi’s squad.

In the last few weeks Arturo has been one of the star players in Serie A, scoring four goals in his last eight games, as Juventus claimed their first Serie A title since relegation to Serie B after the Calciopoli scandal that engulfed the Italian Peninsula in 2006.

END_OF_DOCUMENT_TOKEN_TO_BE_REPLACED

As good as they are at playing high-intensity, exciting football, Chile are just as adept at shooting themselves in the foot; well the players certainly are. Once again Claudio ‘Bichi’ Borghi has had to contend with off-field problems only days before a crucial World Cup qualifying double-header against Uruguay and Paraguay.

The squad that will be looking to add to the three points gained from the first pair of fixtures is much changed from the one that was announced at the end of October after five players were excluded from selection.

Jorge Valdivia, Arturo Vidal, Jean Beausejour, Carlos Carmona and Gonzalo Jara were sent away from La Roja squad having arrived back 45 minutes late from the christening of one of Valdivia’s sons. There were rumours that some had alcohol on their breath but ‘Bichi’ only announced that the players were ‘not in a proper state’.

END_OF_DOCUMENT_TOKEN_TO_BE_REPLACED

Two minutes. That is all it took for Chile to put Friday’s defeat to Argentina behind them and kick-start the long road to Brazil 2014 with a manic 4-2 win over Andean rivals Peru – providing the perfect tonic for an ill Claudio Borghi. Defensive errors that plagued the team in the 4-1 defeat to La Albiceleste were still evident and show no sign of being eradicated but further forward La Roja continue to exhilarate and excite.

Eduardo Vargas – who was one of three Chilean changes from Friday – gave La Roja a dynamic presence in attack troubling Peru with his direct runs and pace while the combination of Gary Medel and Arturo Vidal in the midfield provide a solid base with bite – defensively and offensively. Then there is ‘El Mago’ himself, Jorge Valdivia. He truly is the magician, his feet wands linking midfield and attack, disappearing and reappearing at the right times.

END_OF_DOCUMENT_TOKEN_TO_BE_REPLACED

It wasn’t the start to World Cup qualifying for Brazil 2014 Chile had in mind; falling behind early on did not seem to deter La Roja but a second goal before half-time and when Chile were enjoying a period of domination all but ended the contest. Here is a belated review of some talking points from the game on Friday:

As admirable as it was to state that “we will attack” Argentina from the beginning and setting his team up in a 3-3-2-2 (ish) formation – which included two wing-backs, two ‘No 10s’ and two strikers – Borghi got it wrong. Simple as that. With injuries in defence robbing ‘Bichi’ (Borghi’s nickname) of Pablo Contreras and Osvaldo González there was a required shifting of personnel and a vital midfield component, Arturo Vidal, to the backline. The back three should have been given greater protection than a sole midfield holder (Carlos Carmona), flanked by two wing-back-cum-wingers.